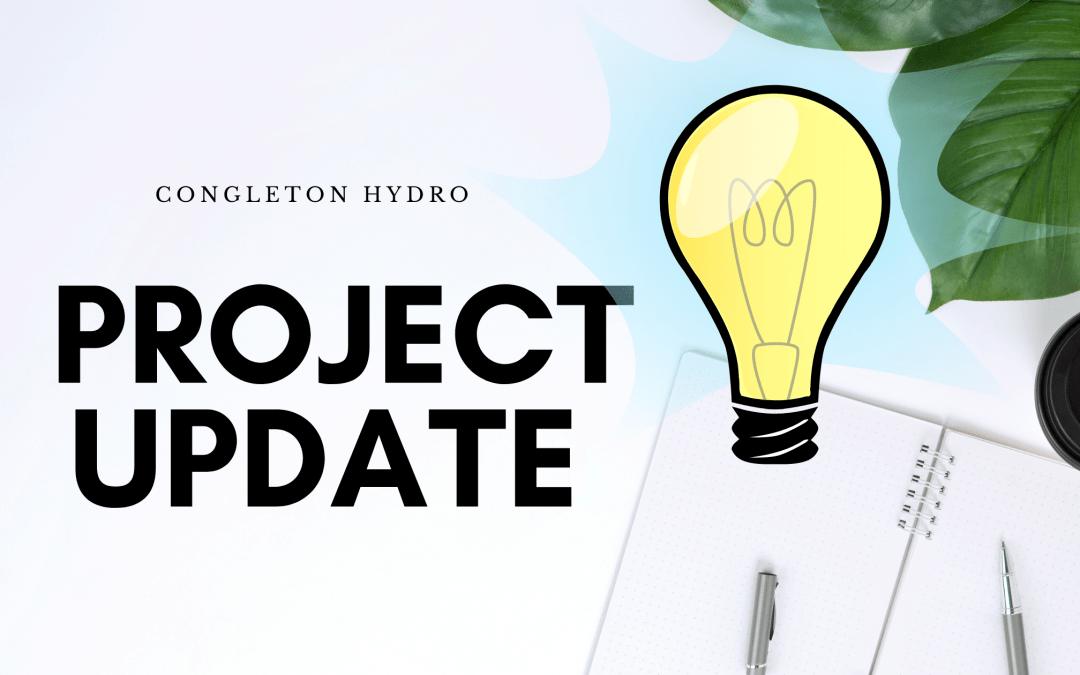 With apologies to The Dave Clark Five!!

We are Clad all Over.

With further apologies to the Dave Clark Five, we hope our workmanship has produced a strong and secure cladding and that it does not all end up in:

For those of you too young to have heard of the Dave Clark Five and those of you whose memories are somewhat jaded and don’t know what this refers to, well, the Dave Clark Five were a popular “Pop and Vocal Band” playing and recording music in the “Fabulous 60’s”. They had a number of “hits” and amongst their best were:
Glad all Over – released in late 1963 and topped the UK charts for 2weeks in 1964.
Bits and Pieces was another track on the Album and made No 2 in the charts also in 1964.

On a serious note (not sure you can get more serious about anything other than 60’s music!!), the cladding is stained with two coats of Ronseal Light Brown wood stain/preserver. The complexities, grief, pain etc of developing & building the hydro all pale into insignificance compared to the executive meeting discussions on “what colour”—we are now experts on the colour charts of the wood stain suppliers and also very knowledgeable about the fact that the colour charts are nothing like what the wood looks like in practice!!!

You might recall from previous newsletters that as well as having to obtain Planning Permission from the local authority (Cheshire East) we also had to obtain approvals from the Environment Agency—environmental aspects and crucially important be granted an abstraction licence (even though we are just “borrowing “ the water for a few seconds before it is returned downstream) One of the key aspects of the Abstraction Licence, as you will be aware is the need to maintain a cosmetic flow of about 6cm over the Weir, and this is the cornerstone reference for the PID control system. We obviously had these approvals in place before we launched the share prospectus and started work. The EA approval always contained a clause stating that they would at some point exercise their right to a Compliance Inspection. This Compliance Inspection took place last Friday (Dec 3rd) with a visit from Mr Valdis Anspoks. Valdis is an Environmental Officer—Cheshire land and Water for the Greater Manchester, Merseyside and Cheshire Area. Valdis, whilst enjoying his visit and being thorough with the detailed requirements of the compliance inspection, was very complimentary about the Hydro Scheme and especially the quality of work and the visible neatness etc of the site and especially the “return to nature” with our rewilding project. Hopefully, his report will also be positive. 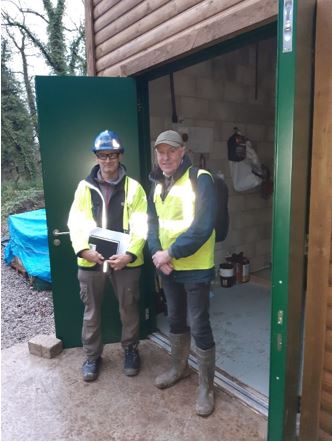 We had a great response to last months newsletters plea for Volunteers to help with clearing out the rubbish caught by the trash screen (twigs, branches, whole trees, and rucks of leaves but no dead sheep yet). Training (especially on how to use the safety harness and life preservers) has been given to some of the volunteers, with further training to be provided this week for more volunteers. A “Hydro Untrashers” WhatsApp group has been set up as the main communication medium. Trash clearing visits are planned for every Wednesday, Friday and Sunday but this of course may vary –up or down—depending on the volume of rubbish travelling into the water intake. 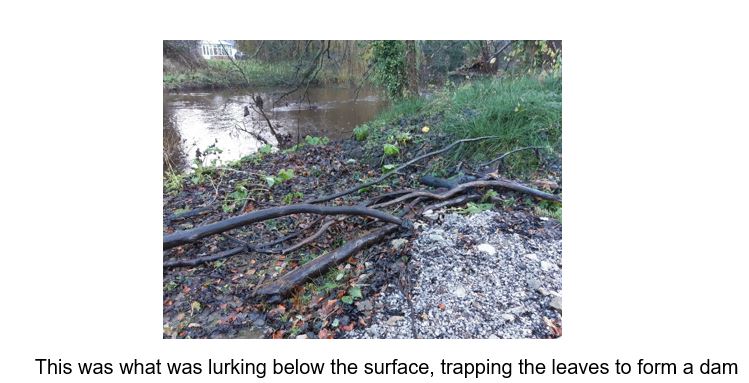 Clearing out the rubbish shown above increased the power generated by well over 10kW.

Our grateful thanks to all those who have volunteered and for agreeing to be part of the rota teams for Wednesdays, Fridays and Sundays. Well Done to you all!

On the subject of Power Generated, despite the very low river levels of most of November and of the high river levels last week  (too high a level means we lose the “head”—level between top and bottom of Weir/Screw) we have still continued to generate, cumulative power to date is approx 50MWhrs 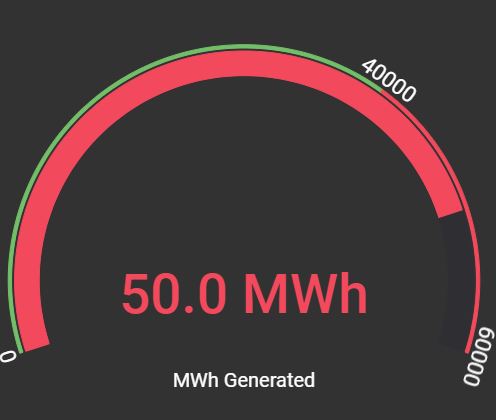 The next 4-5 months will probably be the core generating “season”, we just hope for no drought or storms, just steady rain with minimal vegetation entering the water intake.

In last months newsletter, we mentioned that The Northwest Energy Hub had commissioned a video of Congleton Hydro, this to be shown at COP26 as one of the 10 Innovative “clean energy sites in the North West.

Mike Donaghy from Pulse Media has edited all the output from his hours worth of filming and drone captures to produce a great video. One of our “International Correspondents” (ie outside the boundaries of Congleton!!) had a sneak preview and has likened it to the past two years worth of newsletters coming to life in 90secs!!. With thanks to Gillian Wossick of the Local Energy North West Hub for allowing us to share the video with you.

One of our concerns has been the long-term stability of the “sluice wall” of the Weir. Vegetation i.e. big trees have been sending their roots deep into the structure for many years and disturbing the stone blocks—the power of tree roots is truly amazing, over time pushing up stone blocks weighing several hundred weight. Over a weekend a few weeks ago tree surgeons from Phillips Countryside Services cut down a number of these “aggressive trees” (in line with our planning agreement), they were mostly Ash and were also suffering from Ash dieback. Before Christmas, the two remaining trees will be also cut down and the stumps drilled, and Eco plugs inserted to kill the roots and prevent regrowth. (Eco plugs are a novel formulation of crystalline glyphosate encapsulated in a plastic plug. They present practically no risk to non-target drift and can be used at any time of the year) 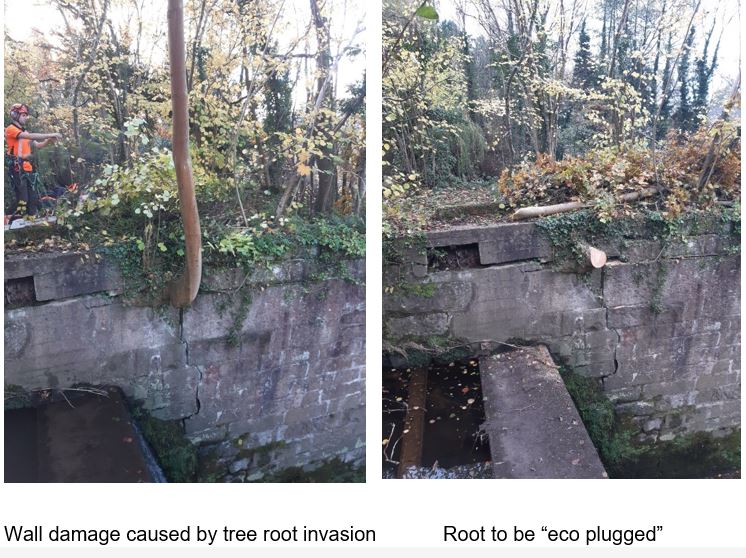 Nature, if left to its own devices is truly amazing, it is almost guaranteed that if you used the worlds best compost, a very fertile seed, planted it in a small crack between two rocks, nurtured it lovingly—it would fail. Left to its own devices, with no help the seed eventually becomes a Weir killer!!!. All the low-level woody plants and shrubs are being left alone as they present no damage to the structure and they will maintain the “woody aspect” of the Weir walls.

On the subject of nature being given a helping hand, the rewilding programme is making good progress. Masterminded by Ruth Benson and a great team of volunteers, work started in September to revegetate the steep and unstable slopes above the hydro scheme and also the triangle of land adjacent to Archie. Mattocks, pickaxes and spades in hand the volunteers energetically broke up the subsoil, removing rucks of rubble, plastic, wood and other debris to try and produce a surface that was suitable for growing a mixture of woodland grass seed and wildflower species. The grass seed, mainly a mixture of woodland grasses, includes a proportion of Westerwolds ryegrass and is used as a “nurse cover” on the difficult areas. It germinates fast and has an extensive root system to hold the soil in place. The upper slope is already greening fast but the slower slope cannot be seeded before winter truly sets in as a perimeter drain needs to be dug first and some further earthmoving carried out to bolster the undercut slopes near the powerhouse. This earthmoving works will take place (weather permitting) before Christmas.

The lower triangle of land adjacent to Archie and the land above the intake pipe will be maintained as a wildflower meadow. Elsewhere, a mixture of locally native trees and understory shrubs is being planted at a relatively high density to help stabilise the slopes. The mix includes oak (donated saplings), alder, hazel, rowan, holly and grey willow, plus hawthorn, blackthorn, elder and crab apple on the more open edge at the top of the slope. So far, around 170 trees have been planted with a further 100 or so to go. As a finishing touch, there will be two native Black Poplars provided by the Trees for Congleton Group as part of a wider project to re-establish these rare trees in the area. Planting should be complete in January/February and by late spring the entire site should be lush and green again. There will continue to be plenty for volunteers to do in the coming year but the sounds of the river, water swishing through Archie, birdsong and the wind in the trees make this an unusual and tranquil place to be. 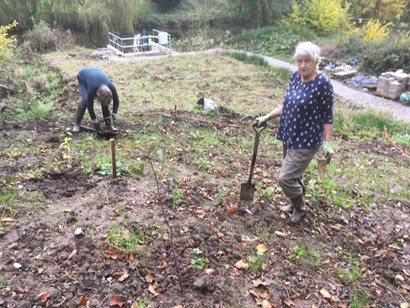 Reaching the lower slopes after a morning’s top-down oak, alder and willow planting.
Our ongoing thanks to all the Volunteers for their energetic, enthusiastic but hard and sometimes dirty work.

Now an apology!!, we did say that by this newsletter we would have in place a booking system so that tours of the site could be booked and organised—well we have failed miserably. We promise to do better and get this sorted as soon as possible.

As with previous newsletters, we hope you have found this edition informative, easy to read and informative. We welcome your feedback and suggestions for improvement and content for future issues.

From all the Hydro Team, we wish you.

A Very Happy Christmas and hope the new year will bring good tidings.

This site uses Akismet to reduce spam. Learn how your comment data is processed.

We use cookies on our website to give you the most relevant experience by remembering your preferences and repeat visits. By clicking “Accept”, you consent to the use of ALL the cookies.
Cookie settingsACCEPT
Manage consent

This website uses cookies to improve your experience while you navigate through the website. Out of these, the cookies that are categorized as necessary are stored on your browser as they are essential for the working of basic functionalities of the website. We also use third-party cookies that help us analyze and understand how you use this website. These cookies will be stored in your browser only with your consent. You also have the option to opt-out of these cookies. But opting out of some of these cookies may affect your browsing experience.
Necessary Always Enabled
Necessary cookies are absolutely essential for the website to function properly. This category only includes cookies that ensures basic functionalities and security features of the website. These cookies do not store any personal information.
Non-necessary
Any cookies that may not be particularly necessary for the website to function and is used specifically to collect user personal data via analytics, ads, other embedded contents are termed as non-necessary cookies. It is mandatory to procure user consent prior to running these cookies on your website.
SAVE & ACCEPT