A Micro-Hydro Scheme using the energy produced by Weir to generate electrical power.

The Congleton Hydro technology relies on an Archimedes screw to convert the potential energy of the river flow to electricity. This type of equipment is extremely robust and we expect the lifetime of the scheme to be in excess of 40 years.

How does it work?

Energy from the weir is related to height and flow:

The background to the site geology, development, civil works and construction techniques  can be found in the detailed article available to download. 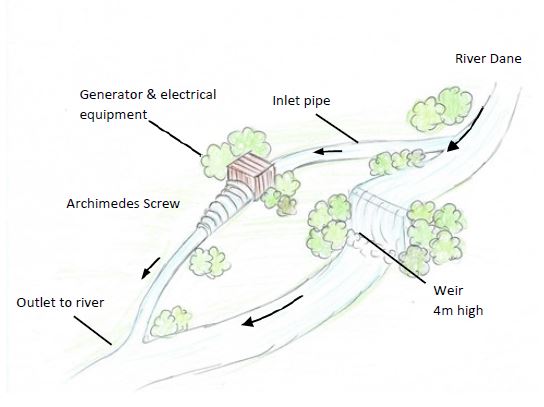 Connecting the Power to the Customer

The Electricity generated by the scheme creates two sources of income. Electricity is exported to a local manufacturing site (owned and operated by Siemens plc) and sold to them at a commercial rate which is negotiated annually. Additionally, the government’s Feed-In-Tariff scheme currently pays a rate of 8.03p/kWh, which is adjusted annually in line with RPI and is guaranteed for 20 years.

After careful analysis and comparison, we found that it was most
economically efficient to install a private cable directly from the hydro to a suitably large customer, this being Siemens who have also been a very generous supporter of our project. A minor detail is that there is a distance of around 1km from hydro to user! To bridge this gap, we are using a long underground electric cable. Thanks to our  contractors, Duttons, for completing this part of the project!

Our cable runs from the Power House to the Siemens factory via the grounds of Eaton Bank Academy and Eaton Bank Farm. A hidden gem? the cable is an essential, but hardly glamorous, component of the Congleton Hydro development. All the hydro’s electricity is exported through it and, hence, all its income flows through it. Maybe it is glamorous after all! 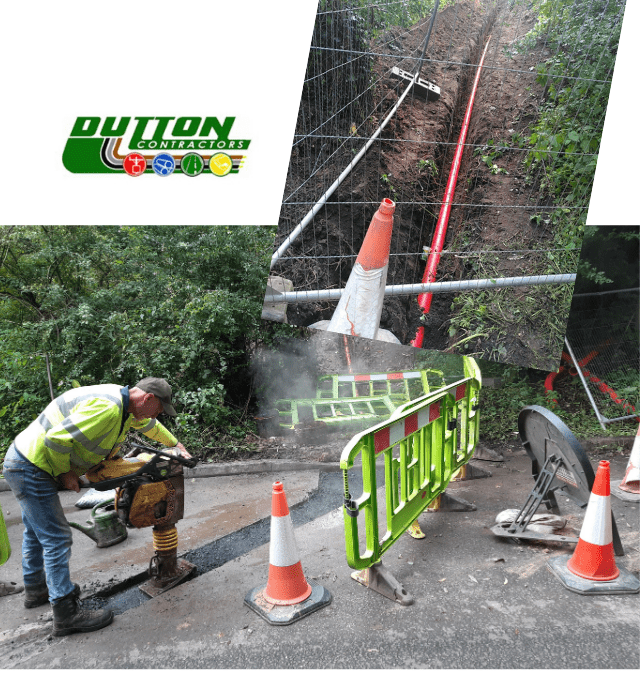 The Conundrum of the Inlet Pipe

When it came to specifying the design of the turbine inlet pipe nothing was quite as straight forward as it would seem.

Some background info. The amount of mechanical power that can be theoretically generated by the Archimedes screw (Pth) is, among other things, a function of the falling height of the water (the so-called driving head (H)) according to the formula.

So, the smaller the value of H, the less power can be generated.

Practically speaking, H is a measurement of the difference in the height of the water in the forebay tank which feeds water into the turbine, compared with the river level at the turbine outlet.

We hope you find the following document of interest, it will help you appreciate the degree of design detail that goes into trying to achieve the optimum performance of the system.

DVCE is registered as a Community Benefit Society with the Financial Conduct Authority (FCA) (Registration Number 7142). This legal structure is regulated by the FCA and governed by rules, which can be viewed HERE.

We use cookies on our website to give you the most relevant experience by remembering your preferences and repeat visits. By clicking “Accept”, you consent to the use of ALL the cookies.
Cookie settingsACCEPT
Manage consent

This website uses cookies to improve your experience while you navigate through the website. Out of these, the cookies that are categorized as necessary are stored on your browser as they are essential for the working of basic functionalities of the website. We also use third-party cookies that help us analyze and understand how you use this website. These cookies will be stored in your browser only with your consent. You also have the option to opt-out of these cookies. But opting out of some of these cookies may affect your browsing experience.
Necessary Always Enabled
Necessary cookies are absolutely essential for the website to function properly. This category only includes cookies that ensures basic functionalities and security features of the website. These cookies do not store any personal information.
Non-necessary
Any cookies that may not be particularly necessary for the website to function and is used specifically to collect user personal data via analytics, ads, other embedded contents are termed as non-necessary cookies. It is mandatory to procure user consent prior to running these cookies on your website.
SAVE & ACCEPT